Honey is a by-product of flower nectar and the upper aero-digestive tract of the honey bee, which is concentrated through a dehydration process inside the bee hive. Honey has a very complex chemical composition that varies depending on the botanical source. It has been used both as food and medicine since ancient times. Human use of honey is traced to some 8000 years ago as depicted by Stone Age paintings.

In addition to important role of natural honey in the traditional medicine, during the past few decades, it was subjected to laboratory and clinical investigations by several research groups and it has found a place in modern medicine. Honey has been reported to have an inhibitory effect on around 60 species of bacteria, some species of fungi and viruses. Antioxidant capacity of honey is important in many disease conditions and is due to a wide range of compounds including phenolics, peptides, organic acids, enzymes, and Maillard reaction products. Honey has also been used in some gastrointestinal, cardiovascular, inflammatory and neoplastic states. This review covers the composition, physico-chemical properties and the most important uses of natural honey in human diseases.

Honey is a natural product that has been widely used for its therapeutic effects. It has been reported to contain about 200 substances. Honey is composed primarily of fructose and glucose but also contains fructo-oligosaccharides and many amino acids, vitamins, minerals and enzymes. The composition of honey varies depending on the plants on which the bee feeds. However, almost all natural honey contains flavonoides (such as apigenin, pinocembrin, kaempferol, quercetin, galangin, chrysin and hesperetin), phenolic acids (such as ellagic, caffeic, p-coumaric and ferulic acids), ascorbic acid, tocopherols, catalase (CAT), superoxide dismutase (SOD), reduced glutathione (GSH), Millard reaction products and peptides. Most of those compound works together to provide a synergistic antioxidant effect.

Honey has had a valued place in traditional medicine for centuries. However, it has a limited use in modern medicine due to lack of scientific support. For a long time, it has been observed that honey can be used to overcome liver, cardiovascular and gastrointestinal problems. Ancient Egyptians, Assyrians, Chinese, Greeks and Romans employed honey for wounds and diseases of the intestine. Since a few decades ago, honey was subjected to laboratory and clinical investigations by several research groups. The most remarkable discovery was antibacterial activity of honey that has been mentioned in numerous studies. Natural honey exhibits bactericidal activity against many organisms including Salmonella, Shigella, Escherichia coli, Helicobacter pylori, etc. In an inflammatory model of colitis, honey was as effective as prednisolone treatment. Research has also indicated that honey may possess anti-inflammatory activity and stimulate immune responses within a wound. Al-Waili and Boni demonstrated anti-inflammatory effects of honey in human after ingestion of honey. Honey, interestingly, has been shown to prevent reactive oxygen species (ROS)-induced low density lipoprotein (LDL) oxidation in some in vitro studies, thus exhibiting beneficial cardiovascular protection. Honey also had antineoplastic activity in an experimental bladder cancer. This article has reviewed important traditional and modern uses of natural honey in human diseases.

Natural honey contains about 200 substances, including amino acids, vitamins, minerals and enzymes, but it primarily contains sugar and water. Sugar accounts for 95–99% of honey dry matter. The principal carbohydrate constituents of honey are fructose (32.56 to 38.2%) and glucose (28.54 to 31.3 %), which represents 85–95% of total sugars that are readily absorbed in the gastrointestinal tract.

Other sugars include disaccharides such as maltose, sucrose, isomaltose turanose, nigerose, meli-biose, panose, maltotriose, melezitose. A few oligosaccharides are also present. Honey contains 4 to 5% fructooligosaccharides, which serve as probiotic agents. Water is the second most important component of honey. Organic acids constitute 0.57% of honey and include gluconic acid which is a by product of enzymatic digestion of glucose. The organic acids are responsible for the acidity of honey and contribute largely to its characteristic taste. The concentration of mineral compounds ranges from 0.1% to 1.0 %. Potassium is the major metal, followed by calcium, magnesium, sodium, sulphur and phosphorus. Trace elements include iron, copper, zinc and manganese.

Nitrogenous compounds, vitamins C, B1 (thiamine) and B2 complex vitamins like riboflavin, nicotinic acid, B6 and panthothenic acid are also found. Honey contains proteins only in minute, 0.1–0.5 percent quantities. According to a recent report, specific protein quantities differ according to the honeybee origin. The average composition of honey is given in Table 1.

A variety of enzymes such as oxidase, invertase, amylase, catalase, etc. are present in honey. However, the main enzymes in honey are invertase (saccharase), diastase (amylase) and glucose oxidase. 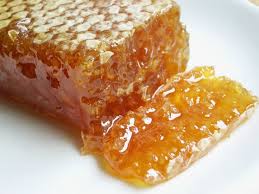 They have an important role in the formation of honey. The enzyme glucose oxidase produces hydrogen peroxide (which provides antimicrobial properties) along with gluconic acid from glucose which helps in calcium absorption. Invertase converts sucrose to fructose and glucose. Dextrin and maltose are produced from long starch chains by the activity of amylase enzyme. Catalase helps in producing oxygen and water from hydrogen peroxide.

Honey has several important qualities in addition to composition and taste. Freshly extracted honey is a viscous liquid. Its viscosity depends on large variety of substances and therefore varies with its composition and particularly with its water content. Hygroscopicity is another property of honey and describes the ability of honey to absorb and hold moisture from environment. Normal honey with water content of 18.8% or less will absorb moisture from air of a relative humidity of above 60%. The surface tension of honey varies with the origin of the honey and is probably due to colloidal substances. Together with high viscosity, it is responsible for the foaming characteristics of honey.

The color in liquid honey varies from clear and colorless (like water) to dark amber or black. The various honey colors are basically all shades of yellow and amber. Color varies with botanical origin, age, and storage conditions, but transparency or clarity depends on the amount of suspended particles such as pollen. Less common honey colors are bright yellow (sunflower), reddish undertones (chest nut), grayish (eucalyptus) and greenish (honeydew). Once crystallized, honey turns lighter in color because the glucose crystals are white. Honey crystallization results from the formation of monohydrate glucose crystals, which vary in number, shape, dimension, and quality with the honey composition and storage conditions. The lower the water and the higher the glucose content of honey, the faster the crystallization.

Human use of honey is traced to some 8000 years ago as depicted by Stone Age paintings. The ancient Egyptians, Assyrians, Chinese, Greeks and Romans employed honey for wounds and diseases of the gut. Here, some of the beneficial effects of honey which have been utilized by ancient races are summarized.

Honey in  indian system of a yurveda

Ayurveda is a compound word i.e., âyus meaning ‘life’ or ‘life principle’, and the word veda, which refers to ‘a system of knowledge’. Hence ‘Ayurveda’ roughly translates as the ‘knowledge of life’. The ancient vedic civilization considered honey one of nature's most remarkable gifts to mankind. Traditionally, according to the texts of Ayurveda, honey is a boon to those with weak digestion. Also it has been emphasized that the use of honey is highly beneficial in the treatment of irritating cough. Honey is regarded by Ayurvedic experts, as valuable in keeping the teeth and gums healthy. It has been used for centuries for the treatment of insomnia because it has hypnotic action. Additionally, traditional Ayurvedic experts recommend honey for skin disorders (such as wounds and burns), cardiac pain and palpitation, all imbalances of the lungs and anemia. Honey has a long history of Ayurvedic use for various eye ailments. Applied daily to the eyes, it improves the eye-sight. Moreover, honey is regarded as useful in the prevention of cataract.

Honey was the most popular Egyptian drug being mentioned 500 times in 900 remedies. Its prescription for a standard wound salve discovered in the Smith papyrus (an Egyptian text dating from between 2600 and 2200 B.C.) calls for a mixture of mrht (grease), byt (honey) and ftt (lint/fibre) as transliterated from hieroglyphic symbols. 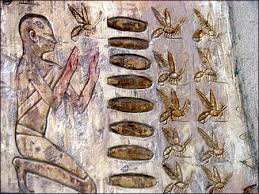 Almost all Egyptian medicines contained honey together with wine and milk. The ancient Egyptians offered honey to their deities as a sacrifice. They also used honey for embalming the dead. Honey was utilized for its antibacterial properties that helped heal infected wounds. Moreover, honey was used as a topical ointment.

Oenomel is an ancient Greek beverage consisting of honey and unfermented grape juice. It is sometimes used as a folk remedy for gout and certain nervous disorders. Hippocrates, the great Greek scientist, prescribed a simple diet, favouring honey given as oxymel (vinegar and honey) for pain, hydromel (water and honey) for thirst, and a mixture of honey, water and various medicinal substances for acute fevers. Also he utilized honey for baldness, contraception, wound healing, laxative action, cough and sore throat, eye diseases, topical antisepsis, prevention and treatment of scars.

In Islamic medical system, honey is considered a healthy drink. The holy Qur'an vividly illustrates the potential therapeutic value of honey: "And thy Lord taught the bee to build its cells in hills, on trees, and in (men’s) habitations; Then to eat of all the produce (of the earth), and find with skill the spacious paths of its Lord: there issues from within their bodies a drink of varying colors, wherein is healing for men: verily in this is a sign for those who give thought". Moreover, the Muslim prophet Mohammad (SA) recommended the use of honey for the treatment of diarrhea. Avicenna, the great Iranian scientist and physician, almost 1000 years ago, had recommended honey as one of best remedies in the treatment of tuberculosis.