August in this area is a hot dry month with little activity for the bees. The nectar flow has pretty much stopped and the hives are not gaining any significant weight. The bees have stopped drawing foundation because the nectar flow has stopped.The queen starts slowing down her egg laying rate and the population starts to decline. Mostly, they are in maintenance mode for the next few months. They keep the hive cool by fanning, finish capping the honey, and work to corral the SHB (small hive beetles). 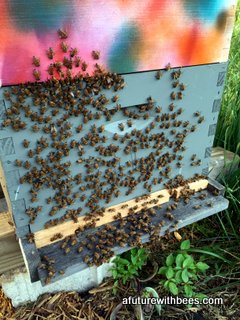 The beekeeper can slow down as well. Swarming is long past and the hives only need to be checked once a month or so if they are set up well. I will be feeding those hives that are too small to winter well. Also feed those hives that still need to draw enough comb to winter. August is a good time to swap out equipment – replace any equipment on the hives with new or refurbished equipment. Re-move and repair those boxes, lids, and bottom boards that are cracked, damaged, or need repainting or repaired.
I will also be harvesting the honey and preparing for any possible late nectar flows. After harvesting the honey, I will return one wet box back to the hive in case they find something to work and need to store more honey. This honey is often darker and has a rich, fuller flavor than early honey.
My boxes and combs are stored dry and in the open air. I have very few problems with wax moths. I will discuss storing equipment in the next month’s articles.

I hope that sharing the lessons I’ve learned, will help you avoid making the same mistakes.